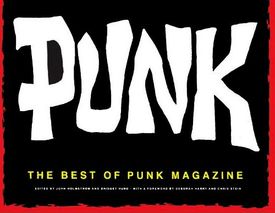 Five years in the making, this massive tome runs for 372  9" x 12" pages and weighs in at 4 1/2 pounds.  This volume assembles "the best" (and they are!) features, articles, interviews (Lou Reed! Patti Smith! Iggy Pop! and many more...), photos and comics (by Holmstrom himself, and others), as well as the amazing fumetti dramas, "The Legend of Nick Detroit," starring Richard Hell, and featuring Lenny Kaye, Bob Quine, all of the Talking Heads, Robert Gordon, Cyrinda Fox and too many more to list; and "Mutant Monster Beach Party," with Joey Ramone and Deborah Harry as star crossed lovers, and a massive supporting cast including Andy Warhol, Peter Wolf, Edith Massey, Joan Jett and more!  In addition, Holmstrom (we presume) provides a personal memoir/history of the days of Punk, organized on an issue by issue basis.  We say:  "A treasure!"