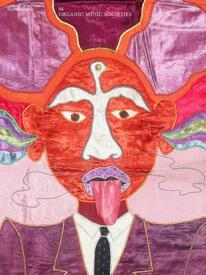 There is just so much interesting history here!  A packed volume of nearly 500 pages, filled with rare photographs and artworks of all sorts, Organic Music Societies does an amazing job of documenting the culture that cohered around Don & Moki Cherry in the roughly two decades – 1965 - 1985 – that they lived and worked together, producing Organic Music Theatre and much, much more, while following Moki Cherry's dictum, "The stage is home and home is a stage."

Here's what the publisher, Blank Forms, has to say about it:

Avant-garde jazz trumpeter Don Cherry and textile artist Moki Cherry (née Karlsson) met in Sweden in the late sixties. They began to live and perform together, dubbing their mix of communal art, social and environmentalist activism, children’s education, and pan-ethnic expression “Organic Music.” Organic Music Societies, Blank Forms’ sixth anthology, is a special issue released in conjunction with an exhibition of the same name devoted to the couple’s multimedia collaborations. The first English-language publication on either figure, the book highlights models for collectivism and pedagogy deployed in the Cherrys’ interpersonal and artistic work through the presentation of archival documents alongside newly translated and commissioned writings by musicians, scholars, and artists alike.

Beginning with an overview by Blank Forms Artistic Director Lawrence Kumpf and Don Cherry biographer Magnus Nygren, this volume further explores Don’s work of the period through a piece on his Relativity Suite by Ben Young and an essay on the diasporic quality of his music by Fumi Okiji. Ruba Katrib emphasizes the domestic element of Moki’s practice in a biographical survey accompanied by full-color reproductions of Moki’s vivid tapestries, paintings, and sculptures, which were used as performance environments by Don’s ensembles during the Sweden years and beyond. Two selections of Moki’s unpublished writings—consisting of autobiography, observations, illustrations, and diary entries, as well as poetry and aphorisms—are framed by tributes from her daughter Neneh Cherry and granddaughter Naima Karlsson. Swedish Cherry collaborator Christer Bothén contributes period travelogues from Morocco, Mali, and New York, providing insight into the cross-cultural communication that would soon come to be called “world music.”

The collection also features several previously unpublished interviews with Don, conducted by Christopher R. Brewster and Keith Knox. A regular visitor to the Cherry schoolhouse in rural Sweden, Knox documented the family’s magnetic milieu in his until-now unpublished Tågarp Publication. Reproduced here in its entirety, the journal includes an interview with Terry Riley, an essay on Pandit Pran Nath, and reports on counter-cultural education programs in Stockholm, including the Bombay Free School and the esoteric Forest University.

Taken together, the texts, artwork, and abundant photographs collected in Organic Music Societiesshine a long overdue spotlight on Don and Moki’s prescient and collaborative experiments in the art of living.

This item belongs to the categories: History & Biography
Search Copacetic
Just in:
See all recent arrivals...
Copacetica
Edifiying essays about all things Copacetic