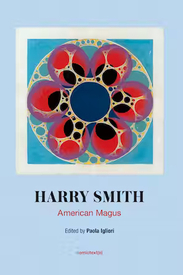 Now is the time to get hep to that enigmatic polymath connecting so much of mid-to-late 20th century avant garde counter culture.  Out of print for over two decades, the still definitive single volume work on Harry Smith is now once again available, courtesy the fine folks at Semiotext(e).  Not only that, this is an expanded edition, with additional material gathered since the first edition, along with an expanded insert selection of photographs and reproductions of his visual works in painting and film, making for an approximately 20% larger edition.

Originally put together in the wake of Smith’s death in 1991 by a long-time, close friend of his, Paola Igliori (who also was the founder of Inandout Press, the publisher of the original, 1996 edition), Harry Smith: American Magus is largely composed of intimate interviews – conducted by Igliori – with those who were closest to Smith, both personally and professionally, primarily his fellow filmmakers, musicians, poets, and artists.

Harry Smith was a unique figure in the avant-garde American arts scene, with a lengthy career spanning blues & folk field recordings, jazz-inspired films and animations, painting and photography, along with writings and musings of all of the above.  There's a wealth of onnections here that reveals many pathways for further explorations.

Anyone with an hour and a half to spare who is interested in a significantly different experience that covers similar ground, is invited to watch Paola Igliori’s documentary film of the same name.